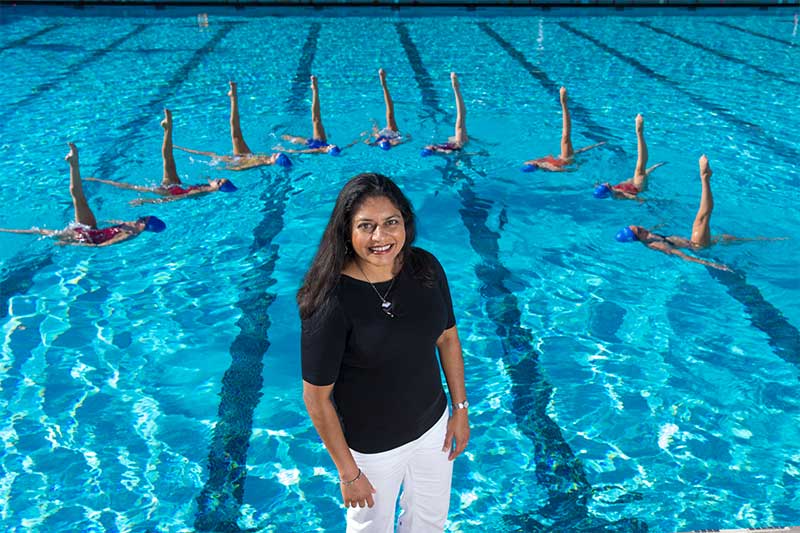 If you have recently been to the Campolindo Soda Aquatic center, you may have seen several young women walking around with their faces slathered in a white cream. It was not a performance of Kabuki Theatre. You were witness to the United States National Junior and Senior Artistic (formally Synchronized) Swim Teams, which have located to Lamorinda in 2013 and have practiced at that facility every year since. The facial covering is from baby anti-rash cream to protect the swimmers from the sun’s reflection off the water. Why not zinc oxide? The anti-rash cream is just as effective, and it washes off more easily.

The last time that the U.S. team medaled in the Olympics was in 2004 when they received a bronze medal. To address this shortfall, USA Artistic Swimming, which is recognized by the U.S. Olympic Committee as the National Governing Body for the sport, went overseas to hire a new coach in December 2018, Andrea Fuentes, who was formally the head coach of Spain’s Artistic Swim Team.

There has been a great evolution in the sport over her career, Fuentes said. “It’s changed a lot. It’s much faster, tougher, and more difficult. There was more show in the past. Now, it’s a pure sport, having to hold your breath all of the time and battling against the gravity.”

Coaching the U.S. team was an adjustment for Fuentes who was used to the governmental support her teams received in Spain while only finding minimal financial support for the American team. “In Spain, we have the support of the government,” Fuentes said. “The players have salaries and many more resources. Here, it’s still more of a model sport so it’s difficult to get funding. We’ve been putting in a lot more hours in practice and have improved our team unity. I don’t have captains because I believe that each swimmer must be the captain of their own roles. I like everybody to be super accountable at the same level.”

Dr. Selina Shah, a sports medicine physician whose office is in Walnut Creek, has been the team physician for USA Artistic Swimming since 2013 and echoes Fuentes sentiments. “The European and Asian countries dominate the sport because of their government support. In Russia and Korea, if you win a gold medal, you are treated like royalty.”

Without these subsidies, the athletes must pay for their own housing. Some live with host families, some are sharing housing and some entire families have moved into the area from all over the country. It’s been a very welcoming environment for the team. “We love the area, and we would love to be able to do shows here and invite everybody to come see us,” said Fuentes. “We are getting close to qualifying for the Olympics now and it’s very exciting. We just want to thank all of Lamorinda and hopefully can give a little bit of life with this dream.”

Unfortunately, with the pandemic, any public exhibitions have been put on hold.

Artistic swimming is an amalgam of several sports, Shah says: “It takes being a really good swimmer, along with incredible strength, stamina and flexibility. It’s like cross training; a mixture of gymnastics, ballet, and swimming. The successful artistic swimmers just know that the ideal goal is to try and be better and enjoy all the training that comes with it. It’s mostly fun when you know you’re going for an end goal of successful competitions and ultimately the Olympics.”

Fuentes who is familiar with almost every synchronized swim team in the world, found a unique quality in her swimmers. “The strength of this team is their pride in the United States. I have not seen this in any other country and for them to see and defend this flag, it makes their adrenalin rise so much that it gives them extra superpowers. These other countries do it for the team and themselves but it’s not the pure pride like we see here. We won’t get any money from the U.S. Olympic Committee until we qualify for the Olympics.”

Regardless, the team is comprised of an amazingly talented group of women. “These are incredible athletes, just like ballet dancers and gymnasts on land,” Shah said. “They make what they do in the water look so easy but it’s incredibly demanding. Since this is the national U.S. team, they are elite athletes. With their level of dedication, commitment, stamina, and determination, they are in a league of their own. It’s just incredible how hard they work and train. The artistic element of the sport, as in dancing, rhythmic gymnastics and figure skating, requires these swimmers to really come to understand their bodies.”

With so many different water sports available, what type of athlete is attracted to Artistic Swimming? According to Fuentes, “It’s for swimmers that like music and dance that have a little bit of artist inside them. It’s a good combination of being in the water with a hard sport and a team sport but like gymnastics, it’s not only a pure sport. They come to understand how the water works. Without the support you have on land, you have to have the mental talent to be tough because of the need to not breathe.”

Holding your breath for 25 to 30 seconds may not seem that difficult but when performing competitively, it’s a far different story, according to Fuentes: “Our swimmers can hold their breath for up to three minutes but when they are under water and their heart is going at 180 beats per minute, 30 seconds is an eternity.”

Not only does the sport require great focus, but it also puts a great strain on their bodies. “It’s very demanding because they use all the muscles in their body,” Shah said. “It’s to an extreme degree because of the amount of flexibility, sustaining of movement and holding of positions that is not only difficult but required. Combined with the intense use of cardiovascular stamina, it shows how incredible their lung capacities are.”

The hips and shoulders are most susceptible to soft tissue injures to the tendons and ligaments because of the extreme movements. As a former gymnast, dancer and swimmer, Shah can empathize with what the swimmers are going through. “The wrists and ankles are also a concern because they have to really pointe (plantarflex) their feet to an extreme degree along with the strength required in their wrists and upper body for the sculling technique. We will prescreen the swimmers and evaluate their areas of weaknesses. The coaches have also incorporated into their regimens preventative exercises such as rotator cuff strengthening and the use of therabands. They have been good about coming to me early on when they begin to feel injuries so that we can nip them in the bud and try to prevent them from becoming a chronic problem.”

The team is battling for a final spot for the upcoming summer Olympics in Japan next August. “We are very close to qualifying for the Olympics,” said Fuentes. “Our next tournament will be in March in Tokyo where we will need to beat France and Greece, two very experienced teams, to make it to the Olympics. We are a young team, but we are starting to rise.”

Fuentes lives in Lafayette and has two children attending elementary school and has really been taken with Lamorinda and the Bay Area. “I love Lamorinda because the people are so nice along with its drive and innovation. The schools where my kids attend are very respectful. The Bay Area is one of my favorite places in the world. I love the character, drive, and energy here. It’s very clean and civilized compared to many other parts of the world.”

What was it that led Fuentes to become a coach? “I wanted to change lives of my athletes in a good way. I want them to have their best experiences in education and growth, to prepare them for their next lives when they finish their athletic careers. I want them to take this teaching of making it happen no matter what and being fair and in the best intentions. They should always pursue their dreams no matter how difficult they are. This is what I am doing and I’m teaching them to be game changers, so I think it’s important for humanity in general, no?”

View Original Publication
Previous Post
The Truth About Soreness: Answers to All Your Burning Questions
Next Post
The ‘12-3-30’ Treadmill Routine Is Crazy-Popular on TikTok—But Is It Actually a Good Workout?

Thank you for subscribing!